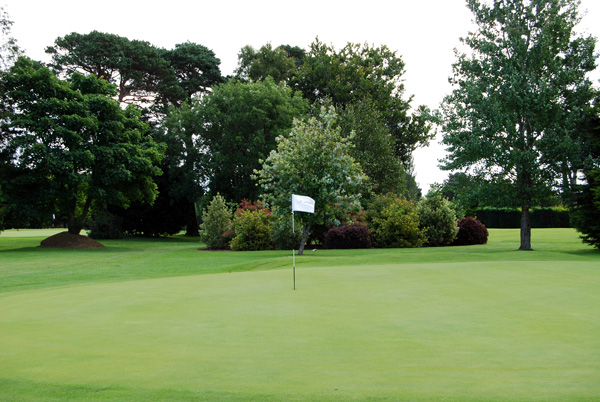 Part of the land on which the course is now situated was originally leased and it is not really known why the purchase was not completed until 1970. The first part of a two-part programme got under way in that year to improve the course and from then to the present day, due to the dedication, generosity and hard work of many Officers of the club and the members, the club thrived.

In 1975, it was proposed to build a new two-storey clubhouse. Following the decision on plans, layouts and tendering, the clubhouse was finally opened in December 1976, and officially opened by Pat Foley, President G.U.I, in June 1977.

First indications of plans to extend to 18 holes comes from the minute book of 1982, where it is recorded that a sub-committee of trusted members was formed to investigate the possibility of purchasing additional land. At an E.G.M, in the same year, a report from Mr. Eddie Hackett, R.I.P., Golf Course Architect, stated that the land to be purchased was suitable for golf, and would yield 7 holes, two others could be got on the existing course, thus giving 18 holes.

A decision was made at the A.G.M of 1987 to proceed with the construction of the new nine holes under the stewardship and direction of the late Jim Whitney. Jim was a man of great vision, persistence and stamina. Unfortunately, serious illness struck Jim in that year and he died in June 1988. His death was a great loss, but an admirable successor, Ted Morrissey, took up the mantle of supervision and direction. Progress on the development was so good that on May 28th, 1989, the 18-hole course was played for the first time.

With some additions of land, changes were inevitable to improve the layout. Both Eddie Hackett and Pat Ruddy, (European Club), both oversaw various changes during the 90’s to give us the course you play on today. In 2005 additional land was purchased to improve the course by the addition of two new holes and the addressing of various ‘safety’ concerns. Mr. Jeff Howes, Golf Course Architect, undertook this planning during 2006 and completed the project in 2007. Construction began in late 2007 on two new holes, a par three 12th and a par four 13th. These two new holes opened in mid 2008.

The 15th index 1 underwent a transformation during late 2011 and was officially opened by the Officers, Course Manager Michael Dee and members of the Management Committee on the evening of April 12th 2012. Following on the continual programme of improvements, the 16th and 17th greens were completely re-constructed during the winter of 2012 and early Spring 2013.

Set in the foothills of the Blackstairs mountain range and looking out over the town to the historic Vinegar Hill, Enniscorthy Golf Club is the jewel of parkland courses in Co. Wexford and is renowned for its welcome to visitors, both by members and staff alike.