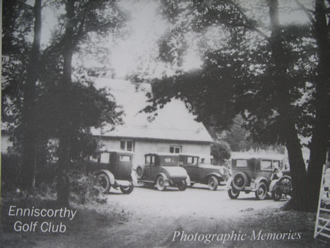 “An early photo of the old clubhouse”

In the clubs centenary publication of 2007, the editors noted the clubs “Uncertain Beginnings” having researched documents relating to its origins. The much respected Golfing Annual, first published in 1887, a notable publication of 226 pages that grew to 760 pages by 1909 listed an entry of a golf club at Enniscorthy in its 1906/1907 edition while a later edition of 1908/1909 listed the Honorary Secretary as Mr. P.F. Roche, The Castle, Enniscorthy stating that there were 50 members.
On the 13th of Jan 1908, the year in which Old Tom Morris died, an agenda for a meeting of the Golfing Union of Ireland, the oldest golfing union in the world dating back to its inauguration on the 12th Oct 1891, mentions Enniscorthy Golf Clubs’ application for affiliation. The affiliation was accepted at that meeting and the minutes indicating this affiliation were adopted and signed at the following meeting on the 19th of May 1908. The club affiliated to the ILGU in 1925.

In the Golfing Annuals’ entry it also stated that ‘the course of nine holes is three quarters of a mile from the railway station’. Enniscorthy Railway Station, opened on the 16th of November 1863, is about two miles from the old club house on the N30 New Ross road, so the original course it is believed by some to be somewhere near or on the grounds of Saint John’s Manor, built on the site of a 12th century Franciscan monastery would easily be ¾ of a mile. Unfortunately, it seems that the course was most unsuitable for enjoyable golfing and could only be played between December and April so as not to coincide with the working of the land for agriculture. Prior to the First World War, an extract from the Irish Field confirms this by stating “golf has languished for some time past at Enniscorthy owing to the course being most unsuitable..”

‘Ground for a new course has been secured near the town’, according to a report in the heretofore mentioned Irish Field of 1913. A Mr. W. C. Pickman who laid out the plans for the original nine hole course at Portmarnock in 1894 was asked to lay out the course and he promised to do so. This land was leased, and it is not really known why the purchase was not completed until 1970. The first part of a two-part program got under way in that year to improve the course, and from then to the present day, due to the dedication, generosity and hard work of many Officers of the club and the members, the club thrived. 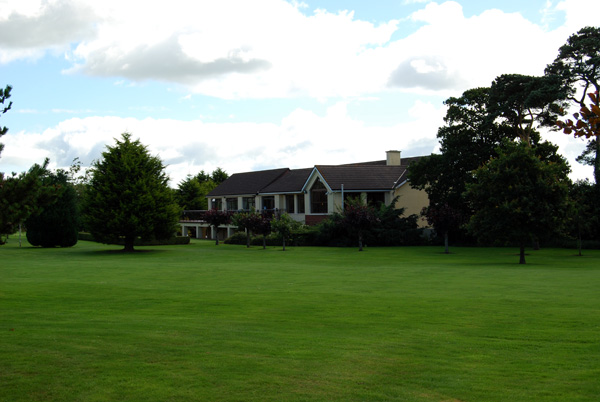 In 1975, it was proposed to build a new two-storey clubhouse. Following the decision on plans, layouts and tendering, the clubhouse was finally opened in December 1976, and officially opened by Pat Foley, President G.U.I, in June 1977.
First indications of plans to extend to 18 holes comes from the minute book of 1982, where it is recorded that a sub-committee of trusted members was formed to investigate the possibility of purchasing additional land. At an EGM, in the same year, a report from Mr. Eddie Hackett, R.I.P., Golf Course Architect, stated that the land to be purchased was suitable for golf, and would yield 7 holes, two others could be got on the existing course, thus giving 18 holes.

A decision was made at the AGM of 1987 to go forward with the construction of the new nine holes and under the stewardship and direction of the late Jim Whitney, a man of great vision, persistence and stamina. Unfortunately, serious illness struck Jim in that year and he died in June 1988 but he is remembered each year when the Jim Whitney Shield is played for. His death was a great loss, but an admirable successor, Ted Morrissey, famed for his role with St. Dympna’s in the 1957 Junior football final against the St. Martin’s, took up the mantle of supervision and direction. Progress on the development was so good that on May 28th, 1989, the 18-hole course was played for the first time.

With some additions of land, changes were inevitable to improve the layout. Both Eddie Hackett and Pat Ruddy, (European Club), both oversaw various changes during the 90’s to give us the course we enjoy today. In 2005 additional land was purchased to improve the course by the addition of two new holes and the addressing of various ‘safety’ concerns. Mr. Jeff Howes, Golf Course Architect, undertook this planning during 2006 and completed the project in 2007. The two new holes are now in play and are an excellent addition to the Course.

We trust you will enjoy the efforts of so many dedicated golfers and friends, those who are still with us and those that have gone to their eternal reward who gave so much to the development of the course as we know it today.
If you would like to know more about the history of Enniscorthy Golf Club, Enniscorthy Town and its people, the limited edition centenary publication “Enniscorthy Golf Club 1907 – 2007” is on sale and can still purchased in the ’98 Commemorative Centre and at the bar in the clubhouse, or alternatively contact the club for details on how to acquire a copy.