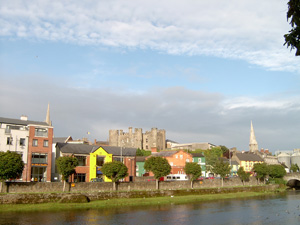 The nearby town of Enniscorthy is within walking distance of Enniscorthy Golf Club and once you make your way onto the New Ross road (N30) there is a footpath all the way into the centre of town. There is a good and varied supply of musical entertainment from traditional to modern in the local pubs, hotels and nightclubs.

"The town of Enniscorthy stands beside the Slaney in the centre of Wexford county; a steep town with street climbing above street from the Norman Castle up to where Pugin's Cathedral overlooks the scene. It is a homely, handsome place, with spacious fair-green and squares, convents, factories, mills, stores, fine schools; over all an air of prosperity that comes from the goodness of the surrounding land and the industry of the people; a democratic place, Irish as the quartz rock on which it stands. From the centre, you look across the river meadow to another hill, Vinegar Hill, on the East bank, crowned by an ancient windmill tower, and wider prospects are through woods to the purple folds of the mountains – to the three heights against the sunset, that were named of old 'The Three Leaps of Oisin's Hounds'. If it were in France or Italy, the world would hear of Enniscorthys' beauty, painters and etchers would depict it in a hundred aspects" 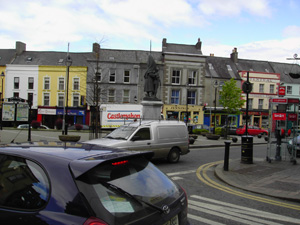 So wrote Aodh de Blacam in 1949. [1890-1951; born Blackham but adopted the name Aodh Sandrach de Blácam and occasionally used the pseudonym "Roddy the Rover". He was born in London, son of W. G. Blackham, MP for Newry, Co. Down; joined London Gaelic League, learned Irish from Robert Lynd in London. He then moved to Ireland in 1915 as journalist with The Enniscorthy Echo. The Enniscorthy of the factories and mills have changed with the consolidation and rationalisation of industry and the changing face of agriculture. With the onset of Urban Renewal and the Celtic Tiger much has changed in the ancient town over the past fifteen years. It is generally accepted that, in spite of the regeneration and architectural revival of the more prominent areas of the town, much has remained the same.

Enniscorthy is an old town, proud of its past and history and looking forward to an exciting future. The origins of the town go back to 510 A. D., when St. Senan, on the advice of St. Natalis of Ossory, founded a monastic settlement on the eastern side of the River Slaney in the area now known as Templeshannon.

As in other parts of the country, Enniscorthy was ravaged by the Vikings when they plundered the area in 795. The arrival of the Normans in 1169 eventually changed the face of the town. Some forty years after their arrival they provided Enniscorthy with its first dominant building when Philip de Prendergast built Enniscorthy Castle.

The Normans reigned supreme until the Kavanaghs became towards the end of the 14th century. For the next two centuries Norman power was severely restricted. In 1459, Donal Kavanagh founded the Franciscan Friary, which according to Cromwell, who passed through Enniscorthy in 1649, was the "considerablest in all Ireland." In 1661 many hundreds of English families were brought into Enniscorthy to man the iron-works which were growing rapidly in that town.

The suppression of the Monasteries by Henry VIII of England resulted in the Castle and Friary being granted to English favourites, one of whom was Edmund Spencer. Eventually the Castle lands and Friary were given to Sir Henry Wallop. The Wallops and their descendents were to exercise a decisive influence on the life and times of Enniscorthy. Later, one of the Wallops was created Earl of Portsmouth. To this day, the Portsmouth Estate, as an absentee landlord claims ground rents from areas of
Enniscorthy.

Dr. Kevin Whelan, in a Lecture 'The Growth of an Irish Town' stated "Wallop was the quintessential new English planter, a soldier, an administrator, a landowner and business. He was energetic, cruel, ruthless and competent. He utilised a potent mixture of force, legal astuteness and entrepreneurial drive to break the back of Gaelic Wexford. His philosophy was uncomplicated. The Kavanaghs were "Rakehellers", "a hardy and unquiet people". He claimed that "there is no way to daunt these people but by the edge of the sword and to plant better in their places".

The contribution of Enniscorthy to the cause of Irish freedom was enormous and spread over many centuries. The 1798 rebellion had a distressing effect on the town. Enniscorthy was captured by the Insurgents after a stubborn battle on Whit Monday, 28 May 1798. It was thus the first Irish town to fall to Irish arms since Athlone, Aughrim and Limerick were lost to the Williamites in the 1690s. The last major Battle of the 1798 Rising was fought on Vinegar Hill on the 21 June 1798.

Enniscorthy was the only town outside Dublin to rise in 1916. The Enniscorthy Volunteers came out on the Thursday of Easter Week in support of their Dublin colleagues and it was the last area to surrender.

The foregoing is only a short potted account of some of the highlights of the passing centuries. In more recent times Enniscorthy played host to the Ploughing Championships in Drumgoold, Bastille Day in 1989, Tour de France and Vinegar Hill Day in 1998 and the Fleadh Cheoil na hÉireann in 1999 and 2000. The opening of the 1798 National Visitor Centre and the state of the art Swimming Pool and Gymnasium are just two achievements examplifying the community spirit that is so very strong in Enniscorthy.

Course Etiquette
Members & Visitors are reminded to Repair Pitch marks, Rake Bunkers & Replace Divots. New signs have been placed on the course in case you forget.